State sponsored cyber espionage attacks are both the least understood and most difficult issues to deal with within an enterprise. We've dealt with several situations where internal IT or even externally contracted security companies failed to mitigate an APT compromise situation. Fighting an APT actor is an ongoing intelligence game, simply playing whack-a-mole removing compromised systems from a network is like treating the symptoms of the problem, but not the root cause, persistence.

Once a state threat actor has administrative control of a network, options become limited. Simply detecting infected systems and removing them will quickly become a costly time consuming losing battle. Remediation must be an enterprise wide initiative, a coordinated password reset, and rebuild of domain controllers, and compromised servers or workstations. Local administrative passwords need to be unique if used. Logging of all remote access, logins, DNS queries, web activity, and net flow will allow a better understanding in future events.

Just a short blog post in follow up to the 9bplus and Xecure Lab posts on targeted attacks using the CVE-2012-0754 Flash calling malformed MP4 exploit in PDF. Adobe reports that Reader 10+ sandbox mitigates this threat, and Acrobat Reader 9.5.1 now uses the separate Flash player which was patched in February.

Scan a PDF with PDFExaminer
Posted by DT at 10:55 PM No comments:

With the recent Sophos report of a CCITTFaxDecode filter being used to obfuscate malware, we decided it was time to add CCITT support for Group 3 1D to PDFExaminer.

We've been aware of one malware PDF using CCITTFaxDecode being used previously, however, the use of Javascript was not obfuscated, just the content, so we still flagged the file as suspicious. After implementing the Group 3 1D protocol [pdf] in PDFExaminer and testing our previously known sample appears to have led us to having found the same file as Sophos, but from 2010-11-07 - MD5: 863f99103941a33fbbe722f0deb3afa5, so there's not a lot of these going around, and they do not appear to be current.

We've recently come across a new technique to evade cryptographic analysis of malware documents by avoiding XOR key leakage by not encrypting any zero-blocks of the malware payload.

The method does take more complicated shellcode and can be tricky, we've previously only seen this technique used with one byte XOR keys, in this case we have a 8 byte XOR key used to encrypt an executable and clean dropped .doc file.

Looking at the original XLS file, we can see that the embedded malware's zero space is not encrypted, the actual XOR key does not appear anywhere in the file: 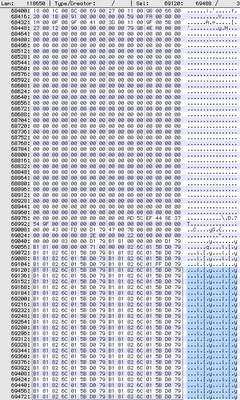 In the image above, we can see that fragments of the inverse XOR key are left when a block of FF characters is encrypted with the 8 byte key. We can see the pattern b181826c015bd079 appears to repeat, since FF in binary is 11111111, XORing FF will leak the bitwise NOT of the key (compared to the full key when XORing 00000000). Using the inverse key and calculating the NOT gets us the actual key 4E7E7D93FEA42F86. Which shows the FF space as suspected: 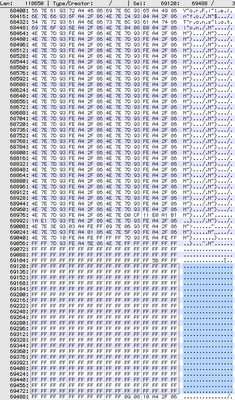 And the malware in encrypted form: 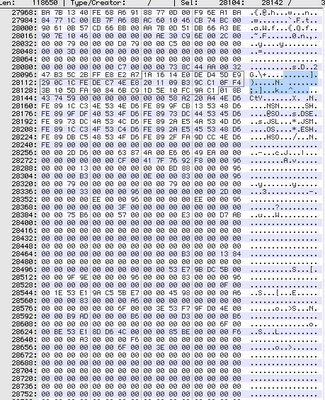 And decrypted we can see the MZ Header: 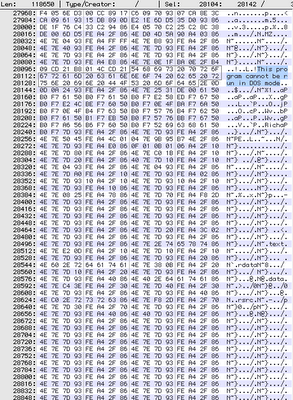 We've added the above as a feature to our Cryptam document malware anaylysis system, this is the report for this XLS trojan: 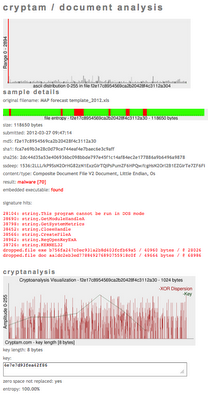 And we've added a new "zero space not replaced" field to the cryptanalysis section. We'll add proper decoding for this in our public tools soon. 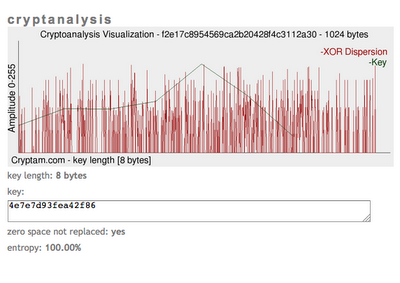 Other new features in the latest release of Cryptam :

Executable and dropped clean document extraction:
While we won't be serving up malware exe files for download after processing on Cryptam, we are releasing this free script to extract embedded executables yourself from a document or PDF file. We've seen a increase in malware MS Office documents targeting Tibetan groups using subjects related to self-immolation.

Extract executables using a known xor key, rol, ror, transposition full/512 byte headers and bitwise not ciphers. Submit a malware document to Cryptam via our API to get the XOR and any ciphers needed for decoding, or query the Cryptam API for decoding parameters of previously submitted documents. All from a single script.

We've added to support to our Cryptam document analysis system detect the embedded flash in Office document exploit CVE-2012-0754, which is a recently patched with a new Flash Player update, yet increasingly used in attacks since at least Feb 27.

Cryptam will detect compressed Flash (CWS) files, decompress them and search for signatures of CVE-2012-0754 as well as conduct a cryptographic analysis to detect XOR encrypted executables as well as ROL encoding to detect new emerging or unknown threats in document format files.

We've noted a small number of samples of CVE-2012-0754 with 2 separate URLs for the remote mp4 file. The embedded executables have used a 1 byte XOR+ROL or just ROL 2 encoded. 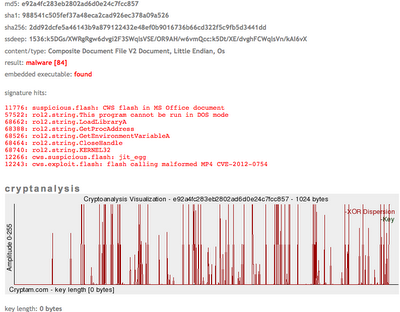 In addition to the detection of embedded executables in documents, you will probably want to run the malware in your dynamic analysis sandbox or do a static analysis in IDA. To decrypt the executable or embedded clean documents etc that are obfuscated/encrypted, we have the following simple script. First you'll need the XOR key and ROL decode shift from a Cryptam report: 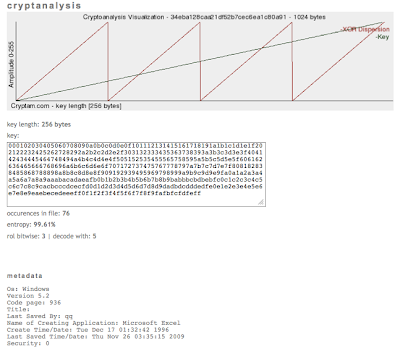 
Then use your favorite hex editor to grab the content from the MZ header onward.

The script (spacing removed by blog editor, use the link above for a clean copy):
<?PHP
/*
* v0.1
* cryptam_unxor.php: MalwareTracker.com Cryptam - command line script
* unxor and unrol
*/

Obfuscation and detection of embedded executables

We're going to talk a little bit more about how our new Cryptam system detects malware documents based on identification of the encrypted executables. A document exploit needs to install an executable, those executables are usually either obfuscated and embedded in the document, or downloaded from a remote site.

APT type targeted email attacks, or "spear phishing" attacks, in our experience, most commonly embed the executable trojan within the document exploit. From plaintext, to obfuscation using 1-1024 byte XOR keys, counters, and Rol/Ror bit shifting are all commonly seen.

Common AV typically fails with detecting malware documents, as the exploit shellcode is usually heavily packed, and the XOR encryption creates a huge number of variants of potential signatures, so usually AV detection ends up being hash based and lags behind the attacks with new attacks getting only 10-20% detection on Virustotal.

Our Cryptam system uses the entropy of the file content to ignore legitimate content and focus on the higher entropy sections to statistically calculate the key used based on the position in the document and occurrences at that position, all in a single read pass, unlike brute force like other systems use, this method is extremely fast.

Cryptam can also be customized for both exploit/shellcode signatures in regex, as well as embedded executable signatures - Windows/Mac/Linux executable traits or library references (which are scanned for using the calculated XOR key and variations of ROL).

A clean document will appear as a lot of noise, randomly:

We've recently released our malware document scanner tool called Cryptam (which stands for cryptanalysis of malware) . This system scans document files such as MS Office (.doc/.ppt/.xls), PDF and other document formats for embedded executables whether encrypted or not. As most embedded malware executables use varying lengths of XOR and ROL/ROR obfuscation to evade traditional A/V detection, we focus on the detection of the embedded executable rather than the exploit itself.

A typical Cryptam report visually shows three critical pieces of the cryptanalysis done. The first graph shows the count for each ascii character in the file, obvious single byte XOR keys can be seen here. The second graph is the entropy of the file, most documents other than PDFs are very light entropy on legitimate content, and only images or the embedded executables showing as red high entropy sections. The third and final graphic is the XOR dispersion over 1024 bytes with the calculated key overlayed. We define the XOR dispersion as the highest occurrence character per position in the 1024 byte blocks in the file. So a 256 byte XOR key used on an embedded executable will have a pattern which repeats 4 times over the 1024 bytes. If the dispersion graphic looks random, it's probably data and not an embedded executable. Sloping lines are typical of algorithmically generated encryption keys - the typical exploit shellcode is very small, and simple counters are commonly used as the XOR key.

The main areas to check in the cryptam report is the summary, for embedded executable signatures - such as an XORed version of This Program cannot be run in MSDOS etc. And the key length - which is typically anywhere from 1 to 1024 bytes, but most commonly 256 bytes with typical APT type attacks. The system is also available as a command line scanner and private web versions like our PDFExaminer product. 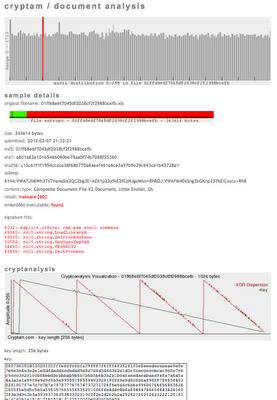 Use the Cryptam document malware scanner online at https://malwaretracker.com/doc.php. Upcoming posts will release a few useful tools to unxor and unrol the executables using the keys Cryptam detects.
Posted by DT at 1:44 PM No comments: