And also a quick note that while no one submitted any CVE-2013-1331 samples to Cryptam before the public release, we would have detected the suspicious ScriptBridge reference in the above sample:
https://www.malwaretracker.com/docsearch.php?hash=714876fdce62371da08c139377f23d76 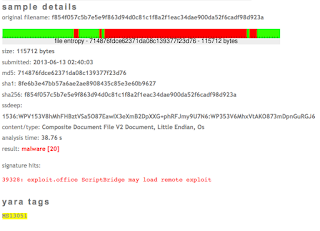 Update: @eromang has found samples of this exploit dating back to 2009, check out his blog post.

Following up to our previous post, our analysis has shown the exploit is patched with MS12-060, however, it is not CVE-2012-1856 which deals with MSCOMCTL.OCX TabStrip.

The exploit we found used in targeted spear phishing in-the-wild uses the Toolbar activeX control to create a stack overflow - not TabStrip, but this new exploit is mitigated with the MS12-060 patch, making it old. Most of the samples extract a 256 byte xored executable after 0x8000.

As the exploit is indirectly patched, we will release all the related identifiers in the hopes that commercial AV can increase their detection rates for this exploit. As the current top document exploit is CVE-2012-0158, this new exploit requires a later patch to fix, and has lower detection rates than CVE-2012-0158 and CVE-2012-1856 we expect it to become even more popular. 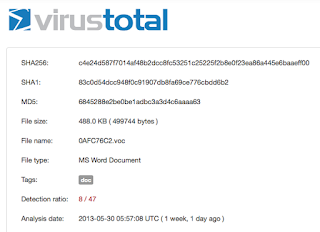 Yara rule for the dropper: 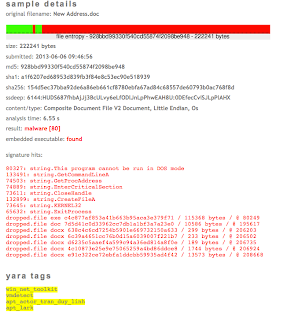 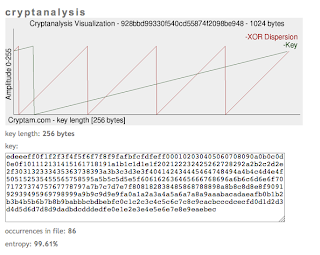 
We believe several groups are using the same document exploit shell to conduct unrelated campaigns.
Posted by DT at 10:37 AM No comments: Links to this post

Update:  So far some of the samples are killed with ms12-060 but are not a known exploit, so this might be a new, but patched exploit. The purpose of this campaign might be to evade AV while going after users without the latest patch - all samples are at 7 or 8 of 43 max on VirusTotal.


We are currently examining 40 samples of an unconfirmed zeroday in Microsoft Office circulating against Pro Democracy and Tibet activists. One of the exploit documents contains a "PittyTiger" payload, however, several different payload implants have been observed. The exploit is contained in a .doc file but could be delivered via RTF as well. We've seen attacks since June 4 2013 using payloads compiled on May 28, and some of the command and control domains have been registered as late as today June 6 2013.

We have provided the samples to Microsoft and are awaiting confirmation.

We will release detection signatures for our Cryptam document malware scanner - free online scanning at Cryptam.com and more details soon.

We recommend taking extra precautions to not open DOC or RTF files received via email or weblinks at this time.


Update 1: Some of the command a control domains are using blog sites for C2. There's at least 4 different implants, so in all probability the exploit has been shared with multiple groups already. We have 40 unique MD5 hashes of OLE .doc files over the past 2 days. Cryptam has been updated with the detection signature - check suspicious docs here.

Update 2: We extracted the following code signing certificates used in 3 of the samples:


Update 3: We're hearing the exploit may be older - patched with ms12-060 but not previously reported.
Posted by DT at 11:56 PM No comments: Links to this post